After my disastrous first attempt at setting a trail cam, which was stolen in less than 24 hours on its first outing despite being what I would consider well hidden and away from any tracks. I decided it was time to have a second attempt, this time with a somewhat cheaper model for fear of another costly theft.

Badgers have long been a species I have wanted to photograph so this seemed the ideal opportunity to test out the trail camera. I set up at a local sett which I have visited on a few occasions over the years, but have never been successful in even seeing any let alone photographing one. I was sure the sett was active as the entrances were clear of any debris and there was also a nearby latrine. Now I would be able to confirm this. 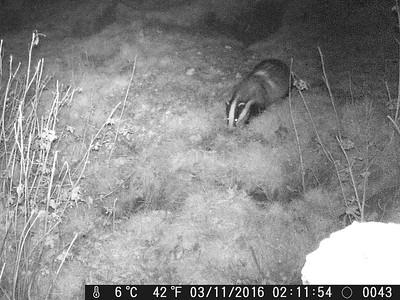 Having now established some activity I am hoping to continue monitoring them and work out their routines. The main goal is to achieve some good quality photographs. As you will be able to see from the videos they did not start coming out of the sett until the early hours of the morning. Hopefully as winter ends and spring approaches they will start to keep some more sociable hours but I will have to wait and see. Watch this space.

Badgers are common here in Kent and found throughout the county wherever habitat allows. They generally go unseen because of their private and nocturnal behaviour.  Due to the ongoing persecution of badgers I am unwilling to disclose this site.